The Chosen: Get Used to Different

Are you watching The Chosen?

This past year our family began watching “television” more separately than together, with the youngest watching DVR recorded shows while the older teen, my husband, and myself binge watch our own series on our individual devices.

But last week, my husband insisted we watch episode one of The Chosen as a family and it drew us all  back to the couch together interested in the same show.  Now we’re gathered each night for an episode or two, occasionally scrambling to get the Bible and find the Gospel passage used in that episode.  (Not all the Scripture because there is a LOT of Scripture in each episode. If you’re curious how much, check out this The Chosen Season One Scripture Index compiled by Peter Chattaway over at Patheos.)

Post-episode discussions even pop up the next day or later in the week as we process the portrayal and development of characters within the story and the world they lived in.

One thing the show does particularly well is create a stronger contextual understanding of the political and religious culture of First Century Roman Occupied Judea. What did it mean to be a fisherman? A tax collector? What was a Pharisee? What did it mean that they were occupied by the Romans? There is a pulse just below the surface that forewarns Roman cruelty. We see the meaning of being an outcast leper or living in the Red district.  It’s one thing to read the Gospels, but another to have better sense of daily life in the time period and The Chosen provides that.  While looking back at the first century with 21st century eyes, we can’t help translating events “then” into “now” as they might apply in our own lives.

The series makes Jesus and the apostles come alive and be relatable.  It personifies Jesus as a man, with all the human emotions, including a charismatic sense of humor. Simon’s portrayal suddenly reminds you of that boy in high school who could get away with almost anything; the big talker who plays it fast and loose, always taking risks that will either go bust or make it big. A cynic, he dismisses his brother Andrew who tries to tell him about finding the Messiah. So when Simon encounters Jesus and believes, it evokes a strong response. 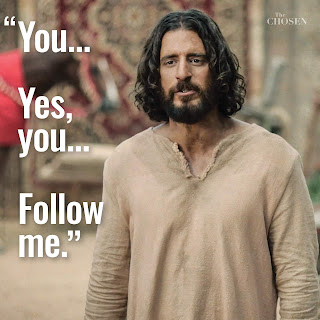 As a tax collector, Matthew lives on the edge of two worlds, never belonging to either. He is portrayed with the exactness of one responsible for collecting monies, but also with a touch of specialness we might equate to being on the Autism spectrum. He does not belong, and we see his observations and his yearning, so his calling, when it comes, is powerful.

And Nicodemus? The search for knowledge and unfolding of realization come together in his meeting with Jesus in such a beautiful way. His personal conflict, in the last episode of season one, is palpable, and I suspect we’ve all been there with him on that corner, hand over our own mouths to silence a cry of anguish. 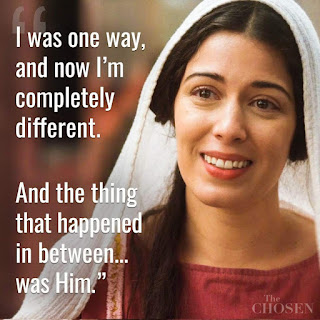 But it is the portrayal of women that is a soothing balm on my spirit. Women are everywhere in The Chosen and not just as “background” characters, but involved, engaged, active participants. When Jesus first appears with Mary Magdalene, my breath stopped, tears springing into my eyes.
Another personal favorite is Jesus speaking with Peter’s wife – not a scene found in the Gospels, but beautiful in conveying Christ’s overall message of being of one flesh in marriage. Also, Jesus' relationship with his mother at the Wedding of Cana is a touching mother and son moment.

There are many of these moments in each episode to draw you into contemplation and there are no easy answers or one way to feel. If we look at the Gospels as fossil bones, hard evidence of what was, then The Chosen is using other historical evidence and inferences to create a fuller picture that helps us understand the message.

With the goal of introducing the authentic Jesus to one billion people, The Chosen is 100% crowd-funded outside the Hollywood system. Viewers are invited to Pay it Forward with a financial donation to help reach the seven seasons goal. Because it is crowd-funded, The Chosen is available to watch online for free at Angel Studios via their Apple app, Google Play, or YouTube.

Season two is now available and beckons us back to the couch.

Come and see what they saw.