The Breakfast Club - a Retreat? 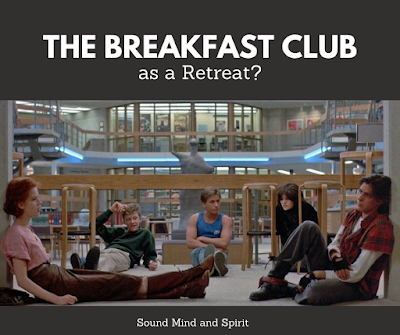 Most of us are familiar with the John Hughes 1980s classic movie “The Breakfast Club” where five stereotypical high school students come together for Saturday detention. Strangers in the morning, they spend the day getting to know one another, leaving as friends in the late afternoon.

In a recent SQPN Secrets of Movies and Television: The Breakfast Club one panelist compared the movie to a road trip, but it could also be seen as a Teen Retreat. Indeed, the plot follows the same outline as many youth and adult retreats – albeit in a more secular manner.

The students arrive as individuals, seeing the world and others around them through a lens ground out of their own personal experiences. This includes conscious or unconscious social prejudices that they automatically apply to each other.

In detention, as on retreats, they are isolated from the real world and its comforts. They are “up the mountain” in a semi-guided environment, only able to interact with those present.

Although no one really wants to be there, they arrive. Silently taking their seats, they project non-verbal cues claiming territory, before lashing out verbally at one another.  Teens on spiritual retreat often arrive hesitant, tentative, clinging to existing friendships, and using non-verbal cues to communicate with people they don’t know well.

In a retreat, a series of activities are introduced to help break down barriers and facilitate thoughtful discussion. Activities in retreats loosen tension and break the ice.

In the movie, the “activities” are generated through interactions with a frustrated, angry authority figure. These encounters pull the students toward one another in resistance and sometimes open rebellion toward him. This creates discomfort, forcing ugly banter that reveals prejudices.

But at lunchtime, Bender takes a risk, opening up about his abusive home life. This initial glimpse behind the tough-guy mask he presents for protection is a turning point in how others begin to see him.

After lunch, they embark on an adventure through the hallway that immediately tests the new loosely formed bonds. Bender’s sacrifice on behalf of the team reveals another layer to this character - a willingness to protect the other’s futures because he believes he doesn’t have one.

When Bender sneaks out of isolation it’s now time for “small group” discussions; the more intimate sharing where people begin to pull down the masks they wear. Small group discussions create lasting bonds.

In the movie, small group occurs when Andy and Brian confess, with raw emotion, the actions that landed them in detention. The vulnerability Bender displayed earlier, now becomes an opportunity for each to admit to the burdens and stress born out of familial expectations and strained personal relationships. These testimonials allow each character not only to see the human person behind their stereotyped group, but also gain a new perspective to compare the life they’ve lived with others around them, opening their eyes to other ways of living, and possibly inspiring them to see a new path for themselves.

In a spiritual retreat, small group leaders would guide these discussions towards an understanding and acceptance of the love, grace, and mercy available to each of us through God. Reconciliation would be available to confess our sins and receive absolution, freeing us to walk away from what was and walk toward what we can become.

Coming Down the Mountain

Inevitably, the question arises, “What happens on Monday?”  Unexpectedly, this experience changed them, as they crossed the barrier from stereotyped strangers to unlikely friends. We see this question often at Teen Confirmation retreats, wondering whether their new friends will still be their friends “in real life.” Specifically – at school.

At a spiritual retreat, small group leaders provide encouragement to support one another in their faith outside of retreat. Generally, the teens also continue meeting weekly to further development of these positive bonds with new faith-filled friends.

The last night of teen retreats typically ends with music and games, a celebration that shakes off the intensity of the day, and The Breakfast Club shares this with music and dancing toward the end of the movie.

Finally, at the end of retreat – and the movie – each of them leaves a different person than they were when they arrived. They will never see the other person at school the same way again, knowing that each life has its own set of challenges and is valued.

Whether you think Road Trip or Retreat, the movie The Breakfast Club is one that stands up to the test of time and continues to resonate with its viewers because it captures a snapshot of real life experiences.  For a deeper discussion about the themes found in the movie, check out the SQPN Podcast “Secrets of The Breakfast Club.”