Hurricane Harvey and its rain brought much destruction and despair to the Texas Gulf Coast region, but what you may not know, is that it also brought Hope.

Before Harvey, I was inundated by arguing, disagreements, violence and indifference on social media, in the news and in popular culture. Everywhere I looked, people seemed at odds with one another. Then Harvey happened.

Harvey came onshore late Friday night south of us. We were on the dirty side of the storm which brought severe thunderstorms, wind gusts and spawned tornadoes. That night a tornado ripped through my neighborhood waking us up with the undeniable sound of a freight train and things pelting the windows. After a few terrifying minutes, the worst was over. We were scared but fine. When the sun came up and we looked outside, we realized the tornado had just barely missed our house while seriously damaging those around us. We were stunned at the damage.

Soon, everyone began pouring out of their homes to check on each other. Thankfully, no one in our area was injured. Almost immediately, people started arriving to the worst hit streets just behind us to begin assessing their needs, cleaning up, cutting up trees, tarping roofs and offering people places to stay. I don’t remember hearing that anyone put out the “word” that help was needed, they just turned up. My husband and son went out to help a neighbor cut trees off his roof while the girls and I went to check on friends. I was amazed by what we saw. The contrast between the destruction of these homes and the sheer number of people out there helping in every way imaginable. It was an awesome sight. There was so much to be thankful for.

My story is just one of thousands such stories from Harvey. You’ve heard the big stories, such as the Catholic Houston businessman who immediately threw open the doors to his furniture stores to anyone needing shelter, or how JJ Watt, NFL superstar, made a quick video on his phone to raise some money for aid and ended up raising over $35 million. How about the Cajun Navy? Those determined men and women who hitched up their boats and headed straight for the Houston area to help out first responders with water rescues.

There are so many stories to tell. What Mattress Mac, JJ Watt and the Cajun Navy did was big and public but those actions are exactly the type of things that many people were doing on a smaller, less public scale with their friends, family, community and even for strangers. Everywhere you looked, you saw the corporal works of mercy in action. Without being asked, told, or even expected people were taking care of one another. Over and over. And it is ongoing as there are still many communities overwhelmed and needing help.

These are the stories from Harvey I want to remember. Heartwarming and selfless actions taken by regular people to help out and support those hurt by Harvey and the floods. When people who were helping were asked “why” by so many reporters, the answer time and again was, “That’s just what you do.” These are the stories that fill me with Hope for our future.

The hard truth is that this will be a long recovery and the full repercussions will not be known for some time, but this tragedy revealed the humanity and compassion we still have for one another. 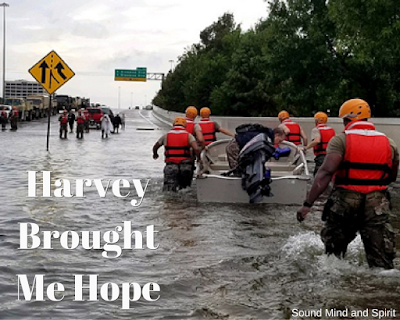