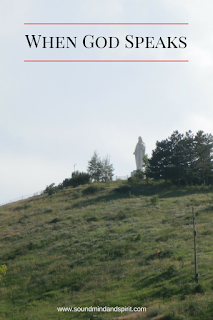 Does God speak to us?  Do you hear Him?

I can’t speak for any of you, but every day I yearn to hear God.
To be always in that calm peace that I know comes from Him.

We get caught up in the rush of life, in the stuff that makes up our lives. There is just so much to DO all the time. Like so many others who struggle between work and family, my work threatens to become my life. There are so many things I want to do… and not enough time. And every day, every night, there is the question, the conflict between what I must do, what I want to do, and what I think God wants me to do.

When my family was in Colorado earlier this month for the softball tournament, we stopped too briefly at the Mother Cabrini Shrine where I found myself asking, what should I be doing? It’s been almost a year since I truly heard and felt God speak to me and give me direction. And back then the message was “Wait, be patient.”

When we returned home, we attended Mass on Sunday.  And there God was. Waiting for me as usual in the Eucharist. But this time was a little different; there was a very palpable sense of God. If you’ve ever felt it, you know what I’m fumbling to say. Every word from the minute I walked in gave me the clear sense of Christ among us. Christ within us. Christ speaking to my heart.

The way someone greeted us. What was invited from us. What we heard in the Liturgy.

Generally when I listen to the readings, I have one eye on the three-year old making sure he’s behaving. So it happens that sometimes certain words and phrases stand out more than others in my mind. This Sunday, the first reading began and this is what I heard:

Off with you, visionary, flee to the land of Judah! There earn your bread by prophesying,“I was no prophet,nor have I belonged to a company of prophets;The LORD took me from following the flock, and said to me,Go, prophesy to my people Israel.Amos 7:12-15

I straightened up; what was that?  Earn your bread by prophesying? The Lord took me?
We sang the responsorial and the second reading from Ephesians began. Again, certain words rang in my ears:

In all wisdom… he has made known to us the mystery of his will in accord with his favor…In him we were also chosen, destined… that we might exist for the praise of his glory…In him you also, who have heard the word of truth…. And have believed in him…Toward redemption as God’s possession the praise of his glory.Ephesians 1:3-14

We stood, sang the Alleluia, and the Gospel according to Mark began:

Jesus summoned the Twelve and began to send them out two by twoand gave them authority over unclean spirits. He instructed them to take nothing for the journeybut a walking stick—no food, no sack, no money in their belts. They were, however, to wear sandalsbut not a second tunic. He said to them,“Wherever you enter a house, stay there until you leave. Whatever place does not welcome you or listen to you,leave there and shake the dust off your feetin testimony against them.” So they went off and preached repentance.Mark 6:7-13

The homily began and I heard God talking to me:

Go – Be a disciple of Christ.
Lead prayer, speak His truth where His presence is missing.
Take care of others.

The disciples didn’t have a plan, they had instructions.
They didn’t know what words to say, they opened themselves to the Holy Spirit.
They witnessed their encounter with Jesus to others.
They spoke their story.
They went in pairs.

What are my instructions?  Continue writing. Don’t worry about how often or when. It's not my schedule, it's His.
What do I say? The same message as those before me, Repent and Believe.
How do I do that? Witness those times when I’ve despaired, looked for Hope, and found it.
Go with others. Lisa and I started this journey together. Continue.

"And so this night we are sent as witnesses."  - closing words from Fr. Dominic Pistone, Jr.