Do you Binge Watch?

By Lisa Henley Jones May 20, 2015
My husband and I like to watch tv. There, I said it. We really enjoy sitting on our comfy couch in front of our flat screen tv to watch hours of mindless entertainment when we can. Sometimes we watch together, sometimes by ourselves and sometimes with the whole family. (Don’t get me wrong, we also watch a lot of football and soccer.) 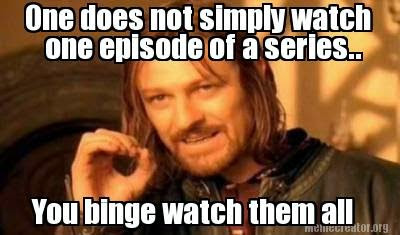 I can hear you now – “There’s NOTHING on TV!” So true. But, we’ve always been binge watchers. You know, the people who will sit and watch episodes of tv back to back for hours on end. Yep. We do that usually late into the night.

In the days before DVRs and streaming services, we would buy our favorites on DVD and watch tv shows season by season. Lost, 24, Heroes, Stargate SG-1, and Band of Brothers to name a few. I guess you could say we were binge watching before it was called binge watching! When streaming tv services went mainstream with Netflix and Amazon Prime, we found many shows that were new to us and it just fed into our tendency to binge watch. 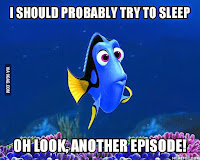 Personally, I’d rather binge watch episodic tv than wait for each episode to air week to week on tv. When you watch episodes back to back, you really get into the story and its developments. And I don’t have to try and remember what happened last week or last month. I mean, lots of stuff happens in a week between shows and my brain can only hold so much. We’ve also been known to skip watching a show when it premieres on the network just so we can watch all of the season’s episodes back-to-back months later via streaming. And we can watch it on our own schedule without overloading our DVR, which makes life so much easier.

Some of the shows we’ve binge watched individually, as a couple or as a family:

If you are saying, “Wow, what an eclectic mix.” You would be correct. Brian and I can have very different taste in shows to say the least. And then throw our kids into the mix and our Netflix account doesn’t know what to suggest.

Netflix catered to binge tv watchers in 2013 when they released all 13 original episodes of House of Cards at one time. It was a huge hit. Netflix has continued to release the second and third seasons all at one time and actually monitors how many people binge watch the season when it is released. We were among those who watched House of Cards when it was first released, though we didn't watch it all at one time like some of the others. We are still watching House of Cards in its third season, with all of Underwood's twists, turns and shocking manipulations. Unfortunately, it has in our opinion, become a little predictable and sad which makes the sleaze factor a bit harder to bear for binge watching.

We (Brian and I, no kids) are now just starting Marvel’s Daredevil on Netflix. I’m not loving all the fighting, but the story intrigues me. It’s a show I want to watch back to back.

By myself, I’m getting started on Blue Bloods at my mother’s incessant recommendations (She LOVES it!). So far, so good. Nice cop show with lots of focus on family relationships.

What are you binge watching? Any recommendations of shows that should be added to our Netflix queue or Amazon Prime watch list?

If you haven't tried binge watching with Amazon Prime, now is a good time to try it out with this promotion - Amazon Prime 30-Day Free Trial

.  (It is an affiliate link, so if you try out the free trial, we will receive a small referral fee.)