Sometimes Winning is Just Getting Back On...

By Lisa Henley Jones July 12, 2014
All through the spring youth sports season I found myself tempted to write about the life lessons my soccer stars were learning by losing almost every game.  After all I can't be the only parent who feels like everyone else's child is winning, winning, winning all the time.  Or, at least according to Facebook, they are all winning constantly, right?

Everyone wants to win at a competitive sport, but I also know there is great value in losing at something.  We all have at least one experience when we didn't win at something but it was an incredible character building lesson.  I can name mine in an instant - Mock Trial semi-finals my last semester of law school.  But when it seems everyone around you is winning and your child is losing game after game, it can bring you down.  Darn that social media.

Just when I was about to put pen to paper (yes, I still write on paper first) my girls rode in a horse show and it really focused my perspective.

Leading up to the hunter/jumper equestrian show, my oldest was riding and jumping amazingly well for her level.  Her instructor and I  both thought she would finally earn a long coveted blue ribbon during her four classes.  I was buzzing with excitement as Ashley led Charley Brown to the arena to the warmup over fences.  As Brown landed their fourth jump, something wasn't quite right.  My camera slid down from in front of my face as I watched my daughter attempt to regain her balance, her grip and then her seat while Brown cantered on to the next jump.  Suddenly, in front of the next jump, she fell under the feet of her horse.  The spectators all gasped as she lay unmoving on her stomach in the dirt.  My heart stopped as we raced around to the entrance of the arena.  Once I heard her start crying I was able to take a breath while first the trainers and then a paramedic checked her over.

After what seemed like an eternity, I heard her laugh (at a joke from the trainers) and I finally exhaled.  Remarkably she was unhurt. The breathe had been knocked out of her and her shoulder was sore from the landing, but Brown had not stepped on her.

I found out later that while she was still laying on the ground, she told the trainers she wanted to complete her ride.  Wow!  Really? Are you sure? But, she did just that.  After a brief time to clean her up and get her a drink of water, Ashley went on to rejoin her group to compete over fences.

Watching her successfully complete that next round of jumps brought tears to my eyes.  Was this really my child? The same pre-teen who began riding less than two years at the suggestion of her therapist to help with her anxiety?  It was incredible to see her complete her competition after such an unsettling fall. 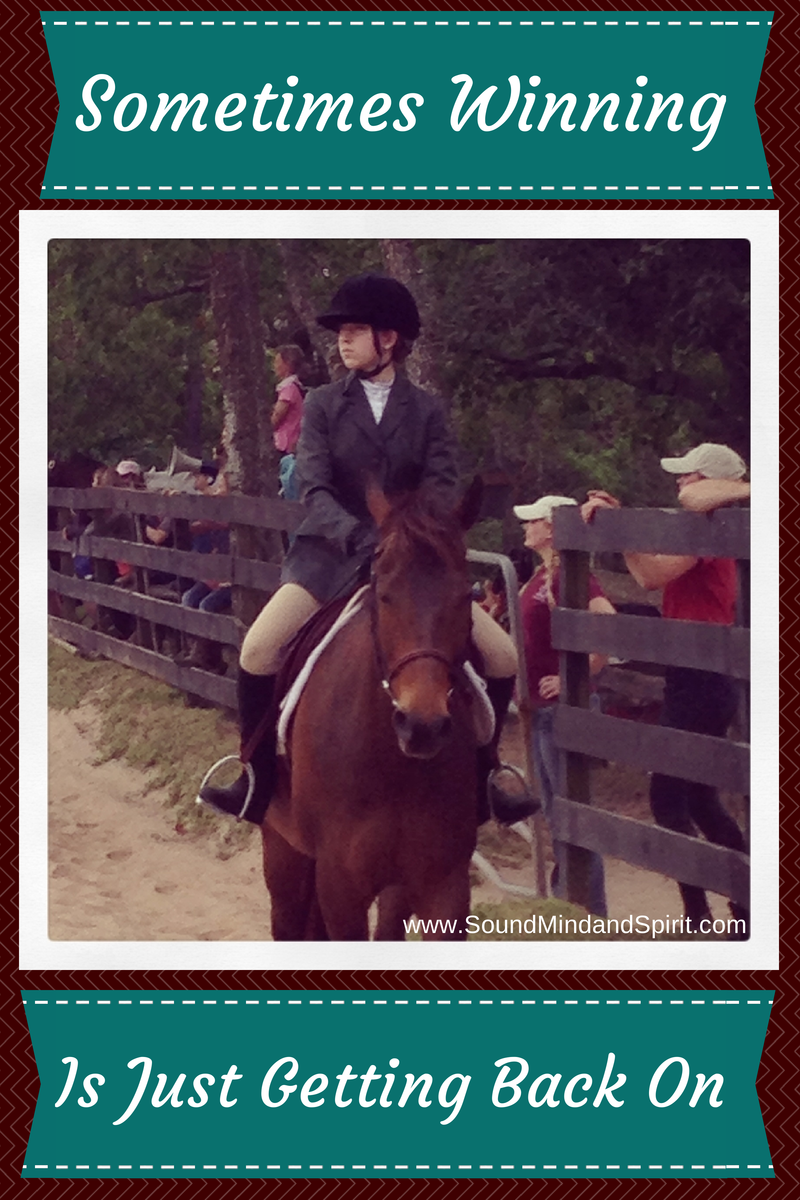 I know you expect me to tell you she rode her best and walked away with that first place blue ribbon, but no, this is real life not a fairy tale.  At the end of the day the colors she won weren't her prize.  Ashley's reward that Sunday afternoon was learning a valuable lesson about herself.