Top 7 Messages from the CNMC 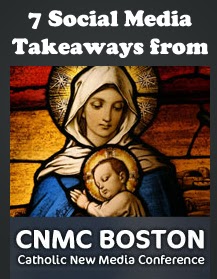 Lisa and I returned from this year's Catholic New Media Conference refreshed and recharged. For our first post-CNMC... post, we thought we'd summarize some of the key messages we heard that resonated and stuck with us.
The keynote speaker this year was none other than Monsignor Paul Tighe, Secretary of the Pontifical Council for Social Communications from ...the Vatican. He spoke about the ways our culture is changing in light of the “new media” and how the Vatican is tapping into utilizing it as a form of communication. Scot Landry, the executive director of Catholic Voices USA and Maria Johnson also gave us some of our takeaway messages. Other CNMC speakers were Angela Sealana, Father Roderick, Jeff Young, Fr. Roger Landry and Pat Padley. While we couldn’t attend them all, we could follow tweets coming from their presentations.

When the Vatican briefed the Pope about using Twitter, the Pope wanted to know the potential reach of the platform. It might seem unusual to try and express complex theological ideas in 140 characters, but amazingly the simple truths and teachings of Jesus fit the format very well. Monsignor Paul Tighe, Secretary of the Pontifical Council for Social Communications at the Vatican, confirmed that the Pope prepares all of his own speeches –including tweets – which are later translated into all the distributed languages. Nearly 10 million people follow the Pontifex twitter account, and surprisingly they’ve been more successful reaching people via Twitter than by traditional news release. For example, when the Pope asked the world to pray for Syria, his message wasn’t getting any traction in the news, but the hashtag #prayforpeace spread rapidly across the world. Monsignor Tighe likened the Pope’s tweets to the parable in Mark 4:1-20 of the farmer scattering seed; we don’t know where his message will fall, find root, and touch the hearts of those in need.

Again and again we heard that the development of Social Media is not just a tool of communication, but has become a new culture. It’s not only changing the way people express themselves, get information, form relationships, and create community, it’s changing our very identity. Christians need to bring their faith with them into the digital continent, because the digital world is not virtual, it’s a very real existential extension of people’s lives. It’s not enough for the Vatican, the Pope, simply to be present online; they must Listen, Converse, and Engage with believers and non-believers. Ironically, Social Media allows the church to return to other modes of communication that the church used before the printed word - music, art, beauty - to warm people’s hearts and lift them up.

Be Present. Be Authentic.

The best communication we can offer is not what we say, but how we behave. We must be present on Social Media sharing our authentic selves, because People judge what they see vs. what they read. We attract others with our behavior, by showing respect for others, patience, tolerance, and civility. We aren’t bringing Christ to others; we are bringing others to Christ through the witness of our personal authentic faith and love. They have to see Him shining through our behavior, our deeds. We must show people what’s happening in our church, not just tell them. Be Joyful. Be Merciful. Be Hopeful. Be Humble.

Our faith is about being human and requires us to build relationships, and not to be condescending with one another. Remember we are all going in the same direction, on a similar journey and it’s important pick up and help one another.

Active parishioners must spread the Church’s message in social media; understanding that by embracing social media tools we can reestablish friendships and deepen connections. All parishes can have new media committees and start training their folks in how to do this. (Scot Landry has a book coming out in early 2014 with a Parish social media blueprint.) Don't overlook even something as simple as tweeting your parish Mass Times, especially on Holy Days. Perhaps Parishioners can “tithe” by sharing the message of the Good News in 10% of their postings on Social Media.  What if before Mass instead of hearing “take out your phones and turn them off,” we started with, “Please take out your cell phones, Open [Social Media] and say you’re at Mass.”

The vast majority of Catholics are lost to the church, but not to us. Nearly every lost Catholic in the United States is connected with an engaged Catholic on at least one Social Media platform. Therefore, every lost or inactive Catholic is only one retweet, one Facebook share, one Pinterest, one Instagram, one YouTube video away from an active participating Catholic. For many of our friends we might be a face of the Church or the only face of the Church; therefore we are challenged to reflect the divine face of Jesus. When parishioners embrace social media and actively post items related to our faith, we scatter the seed that allows Social Media to begin reaching its full potential for the Church.

The Church is a Hospital for Sinners, Not a Museum for Saints

Too many people think the church is against a great litany of things; they either don’t know or forget that the church is about the greater good. The Catholic Church stands up for the vulnerable and voiceless in society. The Church message is always about Hope and Mercy. Consider that every inactive Catholic is inactive because sin is present in their lives. Sin keeps them away – either their own or someone else’s sin toward them. When engaging others, we need to listen to them, hear about their experiences, and respond with respectful friendly conversation. They need to know that we are sinners too and we struggle with similar issues. We don’t have all the answers, but we do have insights to help people grow in joy and peace. We care for people. We care for them. God’s love and forgiveness is stronger than any sin.
To read what other attendees took away during the CNMC, check out their tweets on the CNMC TagBoard.