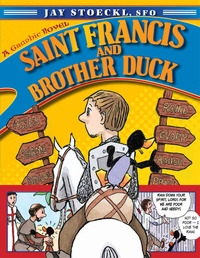 With the election of Pope Francis, people are clamoring to learn more about his chosen namesake, St. Francis of Assisi.   Paraclete Press has published a new way for children to familiarize themselves with St. Francis of Assisi in Saint Francis and Brother Duck.  It is the first graphic novel adaptation of the real life of St. Francis of Assisi.  The author, Jay Stoeckl, a secular Franciscan, was inspired to use his skills as a cartoonist in his first book.

You might be like me and thinking a graphic novel (comic book style) about St. Francis of Assisi and a Duck?  Huh?  And in truth, it is an adorable book that easily relates the story of Saint Francis in a colorful, visual way to young readers.

See Saint Francis come to life as never before in this colorful graphic novel set in the hill-towns of Italy.  Francis saves the life of an innocent duck, the only fictitious character in the story, and the two become each other's inspiration.  As they grow in faith and friendship, Francis recognizes in Brother Duck everything that he desires in living the life of the gospel: humility, poverty and a childlike imagination.

When we received Saint Francis and Brother Duck, my nine year old son picked it up instantly due to his curiosity of a graphic novel about a Saint he was familiar with.  The added bonus that made him sit down to read it immediately was the humor brought to the story by the fictional character of Brother Duck.  He so enjoyed the book, Daniel wrote about it for a school book report and gave me a few sentences to include here:

I like this amazing graphic novel because it is about Saint Francis but with a little fiction. For example: brother duck could be a fiction character because ducks don’t speak. Also I think every one who believes in God or Jesus should read this book. I don’t understand when Francis got the holes in his hands and feet did he die? I recommend it to all ages under 14. ~ Daniel

My 11 year old daughter read it and gave me a short review.

This is a good graphic novel because it takes place in a real time and has serious events but this book takes it in a funny way. I like that in this book it includes Brother Duck, he is a joy to have in the book. I like how he strives to be better like Francis, he tries his hardest and that’s what counts, isn’t it? This book is an amazing book. I recommend it to all ages under 12. ~ Ashley

My six year old daughter has now picked up the book to start reading.  Maybe she'll write her thoughts about St. Francis and Brother Duck.

I received this book for free from Paraclete Press in exchange for an honest review.  And my family and I honestly enjoyed the book.  In an appealing way, Saint Francis and Brother Duck introduces young readers to St. Francis of Assisi and the way he chose to live out the Gospels.  And with the election of Pope Francis, it is a good time to help kids understand the humility and concern for the poor embraced by Pope Francis in the Franciscan way set by St. Francis.