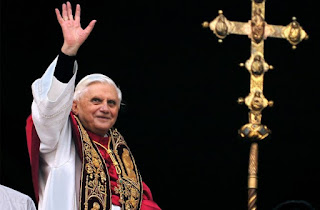 I am overwhelmed with emotion today as we pray with Pope Benedict for the last time.  After Pope John Paul II passed away, I couldn't imagine feeling connected with another Pope.  Blessed John Paul was selected as the Pope when I was very young and his Papacy helped form my teen and young adult years.  He was one of a kind.

Pope Benedict surprised me.  At the last conclave, I was in my early 30's with two small children.  These years were the years I started my renewal in my Catholic faith.  It really began for me after my second child was born and has continued these last nine years.  It was only recently that I realized that my re-dedication to the faith coincided with the Papacy of Pope Benedict and saw the  important part he played in my spiritual reawakening.

After the last conclave, the media reported the ways Pope Benedict was not like Pope John Paul and predicted his disconnect with the faithful.  But what they missed were all of the wonderful ways Pope Benedict would reach the faithful and grow the Church as Pope Benedict.  He wasn’t attempting to copy Blessed John Paul, Pope Benedict was instead the person Christ called him to be as a witness to the faith.  As himself, he connected with Catholics and non-Catholics by speaking the Truth in a sometimes simple, straightforward way that touched people where they were at that moment in their lives.

His calls to continue the New Evangelization, to go forward on the digital continent and make disciples of all nations really connected deep within me.  It was also at this time I discovered social media. In his inclusion of social media he understood these technological tools were an important way for people to share and encounter Christ and we must embrace them.

To understand the way Pope Benedict managed to connect with people in a profound, but approachable way, you only have to look at his tweets from the last few months under @Pontifex.

"We must trust in the mighty power of God's mercy. We are all sinners, but His grace transforms us and makes us new." Benedict XVI (@Pontifex) on Twitter February 10, 2013

We now pray for the College of Cardinals, entering the conclave to select the successor to Peter, for the community of Catholics around the globe and for the man who will be chosen to faithfully lead the Church in the footsteps of Jesus Christ.  And we ask our Blessed Mother to pray to her son Jesus Christ for Pope Benedict.  He has been a strong disciple leading us closer to Christ and we are ever thankful for his dedication to Christ and His Church.  Gazie Papa.