Spending Veterans Day with a Hero

By Lisa Henley Jones November 14, 2011
I am honored to welcome my husband, Brian Jones, as a guest blogger today on Of Sound Mind and Spirit.   He has supported my writing hobby and the blog for many years, so I am thrilled for him to make his first appearance with his own post.  Welcome Brian.


Veterans Day has a very special meaning to the members of my family.  On a cold September day in 1950, my maternal Grandfather willfully charged onto the battlefield to save his company from being pinned down under machine gun crossfire. He knew there was a very good chance he would not be able to go home, however, his duty to tend to the aid of the men under his command outweighed any thoughts regarding his own personal safety. Master Sargent J.T. Dunn died that day, Monday, September 11, 1950, a hero.  I never had the privilege of knowing him, although the stories of his selfless acts of bravery have had a dramatic impact on my life.

For this Veterans day, I decided I would spend a few hours each day reflecting on the sacrifices our past and present soldiers have made, for the defense of the individual freedoms we take for granted on a daily basis.  I immediately looked around our home for “Lone Survivor: The Eyewitness Account of Operation Redwing and the Lost Heroes of SEAL Team 10” by Marcus Luttrell.  This was to be my second read of Lone Survivor in so many years.  As I expected, the second reading of this book instilled an equal, if not greater level of respect and admiration for the members of our Armed Forces. 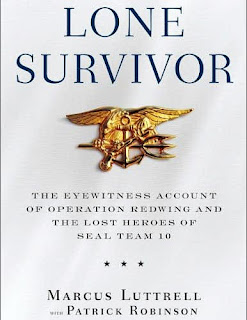 Lone Survivor is the detailed account of a team of Navy SEALs and an ensuing battle that took place deep inside the Hindu Kush Mountain range in Northern Afghanistan. The story is focused on the personal experiences of Marcus Luttrell, the only survivor of what has become know as “The Battle of Murphy’s Ridge”.  Aptly named after Lt. Michael P. Murphy, the officer in charge and subsequent posthumous Medal of Honor recipient.

Marcus Luttrell, a proud Navy SEAL, was raised in a small community about 50 miles north of Houston, Texas.  The book is written from Marcus’s point of view and vernacular.  Having been born, raised and still residing in the suburban Houston area, I was immediately drawn to the stories Marcus told from his youth.  His ability to communicate his upbringing along with his pride in the unique values shared by the people of Texas is uncanny.  He builds credibility and respect by relaying his honest thoughts and feelings about everything from his relationship with God to political correctness.  With Marcus Luttrell, you get exactly what you see, a trait that is rarely found outside of a true Texan.

As a result, Lone Survivor is written in such a way that I found myself not simply reading the book, but pulled into the captivating narrative.  As each night passed, I picked up the book to continue the story and felt Marcus Luttrell sitting in the chair across the room reading the next chapter.  Even though I had read the book once before, I still found myself laughing at his banter with his fellow Navy SEALs while becoming emotional when he was describing the events during the fateful battle.  This truly is one of my favorite books, and I will read it again this time next year.

This past September, my wife, Lisa, and I decided to take a night off from our children to celebrate our 13th wedding anniversary in downtown Houston.  I had secured a hotel room and made dinner reservations at a local restaurant, which had recently reopened due to a natural disaster.  We were excited.  This was our special night, little did we know how special this night would become.

As we arrived at our Hotel and rounded the corner to the registration desk, we were surprised to find Marcus Luttrell standing directly in front of us waiting for a member of his party to finish checking into the hotel.  Lisa and I recognized him immediately.  I was instantly flooded with the memories of his story.  We stood there in line for what seemed like half an hour, although I am sure it was only five minutes.  All the while, the heroic actions of his friends lost in battle, his journey tumbling and crawling down the rugged mountainside as well as the story of his narrow escape from the Taliban was racing through my head.  I could not help but become emotional inside.  My wife stood there in awe as well. She leaned in and asked me if I thought we should say something to him.  I pondered it for a moment, turned my head and simply said no.  It was an easy decision.  He was with his friends, laughing and carrying on.  In my mind, this was one of “his” moments.  A few moments throughout the day where had a taste of normalcy in his life.   A few moments where he could talk amongst friends without the reminder of what happened to him in that Afghan valley.  A few moments where he could enjoy the peace for which he and his Brothers in Arms have paid so dearly.

With this said, I would like to take the opportunity to do so now.  Thank you Marcus Luttrell for your service, your unmitigated dedication to our country and for sharing the heroic story of your experience in the Hindu Kush Mountains the last week of June 2004.   Thank you for making this country a safer place so that my children may have the opportunity to live their lives enjoying the same freedom in which our generation was raised.  And lastly, thank you for coming home and dedicating your days to helping the returning soldiers that so deserve it via The Lone Survivor Foundation.   It is yet another testament to your character and unwavering generosity.