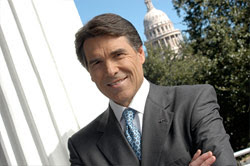 This weekend, the Governor of the great state of Texas, Rick Perry, announced as a Republican candidate for President of the United States. His entering an already crowded field of candidates is a breath of fresh air to me. While there are several GOP candidates on my 2012 Presidential “watch list,” for me Perry brings something new to the table, encompassing qualities I like from different candidates into one overall package.


Since Shelly and I are Texans by birth and by choice, friends from other parts of the country started asking our opinion of Rick Perry as Texas Governor and GOP presidential candidate. Do we think he has done a good job as the executive of our state for over 10 years? Will he be a formidable candidate? Can he translate his success in Texas to bring our nation back from the edge? Or, will he simply be another Bush?


Perry is Not Another Bush


Lets address the Bush issue since many seem to be concerned about whether or not he will be a repeat of the last Republican administration. To outsiders, Perry and Bush may appear similar; they both are from Texas, speak with a Texas “accent,” wear cowboy boots, and were raised in the same general area of Texas. But true Texans know that doesn’t actually make them the same.


Though Bush and Perry both held the same office in Texas as Republicans, they are two very different leaders. As members of the GOP, they share similar party values and stances on big issues; however, their overall view of the role of Governor, in particular how they lead and implement their policies, are not similar at all. To illustrate this point, during the last election cycle, the Bush political camp publicly and actively supported Perry’s primary opponent. It surprised many of us to see President Bush’s former staff, aides and advisors come out so strongly in support of a moderate Republican against Gov. Perry, but we learned the rift between the Perry and Bush camps runs as deep and long as Palo Duro Canyon.


Do what the media won’t... Look past the boots and get to know Rick Perry


Perry grew up in a little place called Paint Creek in the plains of West Texas, an unincorporated farming area so remote the name exists solely as a result of consolidating five rural schools into one.


His parents were farmers, as were his grandparents, and great-grandparents. His mother handmade his clothing, and his school graduated 13 students in his class. Growing up, Perry achieved the rank of Eagle Scout and participated in 4-H before attending Texas A&amp;M University, where he earned a BS in Animal Science. After graduation, he accepted a commission to the U.S. Air Force flying C-130s before being honorably discharged at the rank of Captain five years later.


Gov. Perry returned home to farm the land, like his family, but after a few years found himself drawn to running for the state legislature. The media will shockingly reveal that Perry served in the Texas House as a Democrat before switching to the Republican Party, when he successfully ran for Agricultural Commissioner. What they probably don’t know and won’t mention is that historically, Texas was a Democrat Blue state from Civil War Reconstruction (1870s) until the 1990’s. Many people in Texas, including many elected officials in Texas, were once “Reagan Democrats,” and are now part of the GOP. When Perry was elected Lt. Governor in 1999, he was the first Republican to hold the office since 1873.


For a modern Presidential candidate, Rick Perry's education, family and upbringing are not the traditional Presidential candidate background. He did not attend an Ivy League school, did not attend law school and did not have influential or wealthy parents guiding him or ensuring his success. What I love about Rick Perry's background; what makes him interesting to me as a person is the shockingly normalcy of his life before politics. He could be any one of us. After all, when was the last time we had a President who was not a lawyer, did not attend an Ivy League school and served our country in the military?


More to Come on Perry


There is much more to discuss about Governor Rick Perry, his leadership, values, priorities and ideas. Check back throughout the week for more specifics of why Gov. Perry excites me as a Republican Candidate for President and is at the top of my 2012 Watch List for GOP Presidential Candidates.