By Shelly Kelly May 31, 2011
How did it happen the entire month of May came and passed without my making a single contribution all month? Looking over my calendar, I’ve been buried under a frantic time schedule of work, travel, and pregnancy-related illness. There’s no guarantee that June will be any lighter for me, but I’ll try harder to put up at least one post per week.

Just in the last week, there were a couple of notable items in the news I really wanted to highlight.

In 1969 Pope Paul VI contributed a statement etched onto the silicon disk labeled "Goodwill messages from around the world brought to the Moon by the astronauts of Apollo 11.” Since that time no Holy Father has ever communicated with astronauts living in the heavens until Pope Benedict XVI’s May 21st . conversation with International Space Station astronauts, orbiting 250 miles above the Earth. Organized by the European Space Agency, the Holy Father addressed and asked questions of the two Italian astronauts and their ten U.S. and Russian colleagues. If you missed this papal first, check out the 19-minute video and transcript on NCR.

Tornadoes
The overwhelming devastation, destruction, and loss of life due to tornadoes this past two months deserves a longer post; however, please do not forget the people of Tennessee, Alabama, Missouri, Oklahoma, Arkansas, and Kansas in your prayers and donations this month. While most of my friends in Oklahoma have years of experience dealing with tornadoes, these storms are never ordinary or taken lightly.

New Laws in Texas
Since the Texas Legislature only meets every other year to create our biennial budget and pass new laws, the end of May is a flurry of activity as bills are passed and signed. Two of the bills I’ve watched and prayed for during the past four-to-six years were finally signed into law last week.

In a public ceremony at the state capitol last Tuesday, May 24, Gov. Rick Perry signed into law the Informed Consent before Abortion bill also referred to as the Sonogram Bill. I wrote about the powerful impact an early sonogram can make on a pregnancy earlier this year.

Friday, Gov. Perry signed into law the Voter ID bill, requiring Texas voters to show a valid photo id before casting a ballot. Hopefully this new law will alleviate some of the voter fraud experienced across our state, particularly noticeable in Harris County. I wrote about this bill back in 2009.

Memorial Day is not Veteran’s Day.
Yesterday as I checked Facebook and Twitter, I realized the majority of Americans appear confused about the true meaning of Memorial Day. Many messages thanked our military men and women currently serving or living veterans. While the selfless service of these men and women should be recognized and prayed for daily, the official holiday honoring them is November 11, Veteran’s Day. 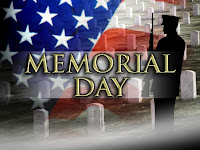 Memorial Day is different from Veterans’ Day in that we solemnly mourn those men and women who died in military service to our great country. Freedom is not free. Each Memorial Day we remember with great humility, prayer, and respect, that our freedom has been bought and paid for with the blood of our fathers, brothers, uncles, mothers, sisters, aunts, neighbors, and colleagues. It is their ultimate sacrifice that allows us to have the right to speak (or write) our mind in protest and debate as one united nation, celebrating what brings us together.

Kelly the Kitchen Kop
If anyone reading today comes to us from Kelly the Kitchen Kop's article on Paleo Diets & Increased Fertility, welcome and thank you for joining us. Your kind comments on my earlier post are much appreciated and taken to heart. I haven't really written about my personal journey with food and fitness this past year, so perhaps I'll make that a summertime post.