By Shelly Kelly April 19, 2011
In late February, I announced my startling realization of an unplanned pregnancy. Since sharing the news, I’ve received an overwhelming amount of supportive comments, prayers, and well wishes, which sustained me through the initial shock. As my family begins planning for the big changes coming in early fall, I’m finally easing into acceptance over this turn of events.

I’ve noticed quite a few changes in the nine years between my pregnancies. Prenatal vitamins now include a DHA supplement and maternity clothes show off your belly, instead of covering it like a tent. But by far, the biggest change is the increased access to sonograms. 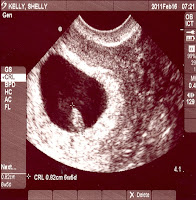 Despite being only six weeks pregnant at my “confirmation of pregnancy” appointment, the physician’s assistant performed an ultrasound right there in the office. I’d never had an ultrasound this early before and didn’t know what to expect, so I was fascinated to see a peanut-shaped body growing around an already beating heart.

Six weeks. According to the Planned Parenthood website, an abortion at six weeks is allegedly as simple as taking a combination of pills to force your body to expel the “tissue” or fetus. At six weeks it could have been so easy. I didn’t even feel pregnant. I’d only known about the pregnancy for barely two weeks.

But I saw a tiny heart beating and that made it very real, very quickly. Four weeks later, the physician’s assistant again pulled in the portable ultrasound machine and said, “It’s still a little early to hear the heartbeat, so let’s just take another look.” Nothing prepared me to see what appeared to be a perfectly formed baby with identifiable arms, hands, fingers, legs, feet, head, mouth, nose, and that heart thumping away. When showing the picture to my daughters, they couldn’t comprehend that the baby was actually only an inch long.

Ten weeks. Somewhere in this time frame an abortion escalates from taking pills to an invasive vacuum aspiration; however, in 2006 statistics show that at least 17.1% of abortions were performed between 9-10 weeks.

Because of my “advanced maternal age” the OB referred me to a high risk specialist for a series of blood work and ultrasound checking for possible chromosomal defects. The appointment had to take place before my 14th week. The genetic counselor asked whether this was a natural pregnancy or IVF, because they strongly discourage women who have undergone IVF from having the blood work performed – specifically because of the high return of false-positive, which lead many women to terminate their pregnancies.

For an hour, my husband and I watched in awe as our 12-week baby bounced, flipped, touched his/her face, and made movements that I immediately recognized as movements made by both my daughters when they were infants. The sonogram provider measured a good strong heartbeat and pronounced all developing along beautifully.

And yet it’s still legal for me to have an abortion. In fact, 88% of all abortions take place in the first twelve weeks of pregnancy. I wonder how many of these mothers have ever seen their baby at this stage of development.

Sonogram Bill
There’s been a lot of news in Texas this Spring about an informed consent before abortion bill going through the Texas legislature also referred to as the Sonogram Bill. The Texas House and Senate each passed two slightly different bills, about 90% similar. Today, the Texas Senate will be voting to approve an amended House Bill. It requires a bi-partisan vote in the Senate and if passed, it is expected to be signed by Texas Governor Rick Perry.

According to the Planned Parenthood website, ultrasounds are routinely provided as part of their abortion services; however, according to testimony, women are not permitted or to view the ultrasound. When passed, this bill will require abortion providers to perform a sonogram 24 hours before the scheduled abortion. The provider is required to show the image to the woman, allow her to hear the fetal heartbeat, and provide a detailed description of the fetus. (Women in rural counties with a population of under 60,000 will have a two-hour delay instead of two days, although 93.5% of all Texas abortions take place in counties with a population greater than 60,000.) The new draft exempts women who are victims of sexual assault or incest or in cases where the developing baby is fatally deformed. This bill is supported by the Catholic Conference, Texas Alliance for Life, Texas Right to Life, and Eagle Forum.
Ultrasounds Provide Valuable Information
As someone who struggled with acceptance over a pregnancy, one of the best things that happened to me was that ten week ultrasound. Four weeks earlier I had seen a relatively shapeless figure with a strong, though tiny, heartbeat, yet at the ten week appointment I saw and recognized a growing baby acting like a newborn stroking his/her face as though searching for a thumb to suck. Even though abortion never once entered my mind, I think it’s important for women considering abortion as a choice to have the same opportunity of witnessing the miracle of life growing inside them. Terminating a pregnancy should not ever be “common” and “effective,” but the serious, life-changing event it is where all available information is provided in advance so the woman has time to think about it. Ultrasounds should play a vital role in that information.