Are You Ready for the New Translation

Beginning November 27, 2011, the words we are so familiar with reciting during Mass will change when the new English Translation of the Mass goes into practice. While the greatest number of changes affect what the Priest says, many of our familiar responses will be altered also. Catholic parishes are already designing parish wide training sessions to introduce these changes to their members.

Guide to the New Translation

To help familiarize parishioners with the new changes, Ascension Press released a small Q&A booklet titled A Guide to the New Translation of the Mass by Edward Sri. One of the changes brought about by Vatican II was the allowance for the Mass to be said in the vernacular, or common, language of the people. However, the English translations varied from one English-speaking country to another. (If you’ve ever had a conversation with someone from Australia or England, you’re aware how our vocabulary differs.) In the first English missal, published in 1973, the Latin to English translation focused on the overall general meaning, rather than the literal, and as a result certain images or meanings were dropped and lost. This more precise translation, developed and modified over the past ten years, is now ready for implementation at the beginning of the new liturgical year on November 27, 2011.
The booklet offers answers to questions such as Why do we need new translation, How significant will the changes be? And What are those changes? The guide also provides brief discussion on the meaning behind some of the changes and includes a tear-out reference card printed with the new responses. The new translation changes are available for viewing online at the USCCB website, and the guide includes a more in depth look at the reasoning behind some of the slightly major word changes. Once fully revealed, the new changes make sense and are easier to embrace. Personally, I love noting how the new translation returns to the nobler tone of the Latin, encouraging a reverence and humility into the Mass.

It’s an exciting time for parish faith formation teams, because it’s an opportunity for all of us, as a whole, to really focus and consider what we say and do at the Mass instead of simple rote participation. Implementation teams in dioceses and parishes across the nation will be teaching the changes as a return to the foundational aspects of our faith, focusing on the meaning of the liturgy and the real presence of Christ.

And with your Spirit

One of the most visible examples is our new response to the priest’s greeting, “The Lord be with you.” Most of us without even thinking automatically raise our hands and reply, “And also with you.” However, the Latin is et cum spiritu tuo - which actually means “And with your Spirit.” We’re not just casually saying “You too, Father,” we’re acknowledging that the Holy Spirit is present, working through the priest as he prepares to consecrate the Eucharist. Knowing this has already changed how I think about our responses in Mass. As a cradle Catholic who has only known the post-Vatican II vernacular Mass, the more I learn about how the Mass developed and the biblical roots behind our responses, the more I feel myself ready to embrace the new translation. Instead of dwelling on the loss of the comfortable cadence I grew up with, I’m excited to prayerfully consider the real meaning of what we are saying and doing.

Watch for implementation training sessions to begin in your own Parish and plan to attend with open heart and mind. Purchase a copy of Edward Sri’s Guide to the New Translation of the Mass and recommend it to your Faith Formation Leader. Pray for spiritual understanding of the true meaning behind the Liturgy and Eucharist to be revealed as you begin to learn more about the upcoming translation changes. 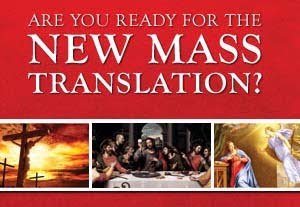