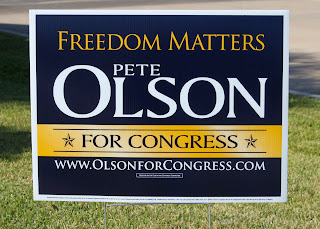 Last night I attended a small reception for the reelection of my Congressman, Pete Olson of the 22nd District in TX.    One of the few Republicans to take a House seat away from a Democrat in the 2008 elections, Olson now faces his first re-election.   While his seat appears to be safe, he is not taking this election for granted.  He asked this group of 40 voters to make sure we turn out to vote when early voting starts next week. He insisted that residents of the 22nd show up at the polls not only to vote for him, but also to support every other Republican on the ballot, from county judge all the way up to Governor.
Congressional Redistricting
We cannot emphasize the importance of this election season in  state politics as well national.  Based on the projected census numbers, Texas stands to receive four new Congressional Districts.  This spring, our Texas Legislature will draw new lines, incorporating the new districts.  Therefore, it is imperative that the Republican Party widen their margins in the Texas House and Senate in preparation for the upcoming redistricting battle.  You may well remember how Texas Democrats fled the state to avoid quorum during the last redistricting session ten years ago.  We do not want a repeat of that costly and essentially unproductive stunt.
Hearing our Message?
During my opportunity last night to talk directly with Congressman Olson, I asked him if the Republican party has heard the message from the American people? Are they ready to stop deficit spending when they regain control of the House in January?   We discussed the importance of not only halting the unprecedented increase in spending but also returning to 2008 spending levels.  He pointed out that my niece - who will be born in a few weeks, already owes more than $30,000 to the federal government.  It is morally unacceptable to bankrupt our future generations in the name of bigger government now.
Pledge to America
When addressing the group he requested that everyone read the Pledge to America written and adopted by the Republican House members.  Through their Pledge, they promise in the next legislative session to return to First Principles, honor the Constitution, advance policies that promote greater liberty, wider opportunity, a robust defense, and national economic prosperity. They further pledge to honor families, traditional marriage, life, and the private and faith-based organizations that form the core of our American values.  These are also the values and beliefs being expressed by grassroots Conservatives, Independents and Tea Party activists around the nation.
House of Representative Powers
Congressman Olson reminded us that the House of Representatives possesses the power of the purse, which may allow them to effect major changes in policy even if they cannot override a Presidential veto.  The subpoena power is their second major power.  The American people are angry about the lack of promised transparency in government and oversight of the executive branch.  When Republicans regain control of the House, they can use subpoenas to force accountability in the federal government.
What can I do?
Even if your District appears to be a “safe” district, make a clear statement by showing up to vote!  In my District, I want Congressman Olson to win by a wider margin and to receive more votes than typical in a mid-term election.   We want to send a message to Washington that Texans are paying attention to how DC is attempting to transform our Great State.
Early Voting
Early voting in Texas starts Monday, October 18th and runs through Friday, October 29th.  Governor Perry’s campaign has made it easy to find your early voting locations in Texas.

Guide to All Texas Early Voting Locations provided by RickPerry.org