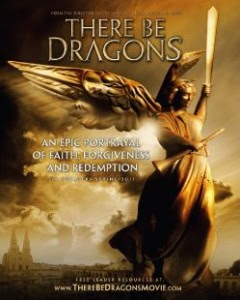 Keep an eye out for There Be Dragons, a new major motion picture written and directed by Roland Joffe, the Academy Award nominee who brought us the highly acclaimed and deeply spiritual film The Mission.
Scheduled for worldwide release in Spring 2011, There Be Dragons is a powerful story of war, tragedy, love and redemption. Set during the turmoil of the Spanish Civil War (1936-1939), one of the most violent periods of religious persecution in the history of the church, Dragons tells the story of two childhood friends who become separated during the political conflict to find themselves on opposite sides as war erupts. One chooses the path of peace and becomes a priest while the other chooses the life of a soldier driven by jealousy and revenge. Each will struggle to find the power of forgiveness over the forces that tore their lives and friendship apart.
The film, rated PG-13, is based upon the life of St. Josemaria Escriva, founder of Opus Dei, whom I have never read much about, so I’m really looking forward to seeing the film when it’s released. Don't let the angel on the poster mislead you, the trailer below shows the film to be action packed and quite dramatic. I have a feeling this is going to be one of those films that makes me run to the library (or internet) to find a stack of non-fiction readings on the Spanish Civil War and St. Josemaria Escriva.