Karl Rove is Compelling in Courage and Consequence 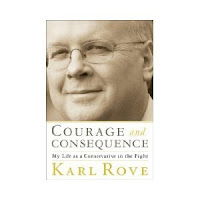 Hearing Karl Rove, noted republican strategist, speak last Spring inspired me to read his recently released book, Courage and Consequence, My Life as a Conservative in the Fight.  His book is part biography and partly a peak into the behind the scenes happenings during the George W. Bush administration.  Not knowing much of anything about Rove’s personal life, the first part of the book was extremely intriguing.  Not at all what I had expected.  As a political junkie, I was then fascinated by Rove’s detailed account of elections, policy decisions and the inner workings of D.C.
The author’s tone and perspective on his involvement in a slice of recent American History is personable, thoughtful and extremely humble. He leads you through defining events not only in his life, but also in regards to his role in the White House.  Rove’s detailed analysis of many front burner issues during the Bush Administration give you a peak into the decision-making and interpretation from some of the major players at the time.
Rove dives into political details with a great respect for not only the office of the President, but for George W. Bush himself.  If you are expecting a political tell all that tells tales and calls the opponents names, you will be disappointed.  In every instance, Rove has taken the high road in discussing political opponents, newsmakers and even the special prosecutor who pursued him.
At times, his storytelling is so candid you can hear the sorrow, pain, regret or humor in his voice.   Finishing the book, you are left with an impression of an intense, extremely intelligent businessman and a great student of American history with an uncanny ability to comprehend modern day politics.
If you are not sincerely interested in politics from a center-right perspective, you might have trouble reading this book.  It is long and extremely thorough.  For those who followed Rove’s career or the Bush Presidency, discovering the background of many controversial decisions and missteps ensures the book to be a compelling read.