By Lisa Henley Jones September 10, 2010
On the morning of September 11, 2001, we woke to the ringing telephone when my good friend Karen called to tell us that while watching the Today Show, she just saw a plane hit the Twin Towers.  Hearing her words, my first thought was a small, single engine plane had gotten lost.  As the pictures appeared on my television, Brian and I sat there stunned.  It was unbelievable.

After watching for a few minutes, I called my office in Austin to see if my coworkers knew what was happening.  No one answered their phones, but later I received several emails letting me know the entire company was watching coverage from the conference rooms. Needless to say, no work was done that day.
When the first tower collapsed, I could not control the wave of emotion that overtook me. The thought of people still trapped in the building and those on the ground nearby started me sobbing uncontrollably.  My husband came running in from the other room where he was working, to console me.  I found the whole morning completely overwhelming.  It just couldn’t be real.
At some point that morning Brian told me we were now at war.  Believing that these horrendous acts changed the course of American history forever terrified me.  I sat in front of the TV for hours with my hands on my pregnant belly trying not to be fearful of the world our daughter would be born into in a few months.  I prayed for our country, the American people and our baby daughter. 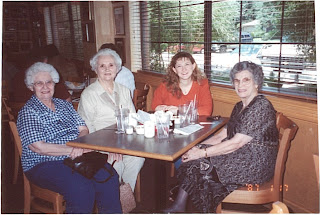 Despite what was occurring across the country, I kept my important lunch date with three of mine and Brian’s grandmothers.  Our conversation  focused on what had happened that morning and turned to the similarities of another morning surprise attack many decades before.  Our grandmothers shared their remembrances of the attack on Pearl Harbor and the subsequent wartime. All three ladies concurred that American was going to war.
My husband was correct, 9/11 changed our world and our country. It opened our eyes beyond our borders.  We now live in a post 9/11 world and in some ways it is better than that of 9/10. We now know that as a nation, we will come together when attacked.  We will reach out and support our fellow Americans in need.  Thousands will step up and volunteer to defend our great nation from further threats.  And that our great nation is still strong and a beacon of light for all those who wish to be free.
We pray for God’s continued blessing on our great nation. And we teach our children every day about the founding of America, about the brave servicemen and women who sacrifice everything for our freedom and our country and about what makes the USA a strong, important leader in the world.
I still cry watching television coverage of 9/11, it reminds me of the fear, worry, national pride and eventually the anger I felt that day.  But I watch it every year because I need to remember not only what happened, but also the raw emotion I felt as our country was attacked.