Your Voice: Coming this November 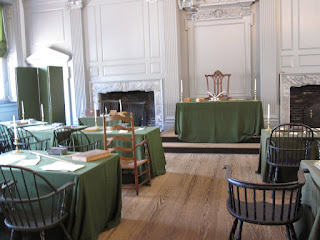 After the CNMC I had the opportunity to spend a day with my family in Philadelphia. Naturally we had to take a tour of the old Pennsylvania State House, now infamously known as Independence Hall. During the introduction, our National Park Service Ranger set the stage by outlining events leading up to the Continental Congress creating the resolution we know as the Declaration of Independence.
I heard these words with renewed interest considering all that has taken place in the past 18+ months in our country. Then the Ranger mentioned how the dissatisfied colonists were affected by Parliament without having a voice, so they wrote a petition to the King complaining against the acts of Parliament and asking for the opportunity to govern themselves under separate Parliaments for each colony respecting the sovereignty of the King. King George III not only denied their request, but also ordered loyalists to put down their rebellious neighbors.
As I’m listening to how the colonists had no voice, no redress for their grievances, it struck me that as much as I hear people complain and get riled up over what Congress is passing these days, we DO have a voice.

If you don’t like the direction that our government is going, take a long look at how your Representative and Senator are voting on key pieces of legislation. What bills have they sponsored? How often have they voted and do you agree with their votes on record? Don’t listen to their upcoming campaign promises and re-election speeches. Look at their voting record over the past two years (or more) and decide for yourself whether you feel this individual represents your interests in Congress.
If you don’t like what you see, take a good long look at the opponent, and then USE YOUR VOICE. We have the power to contact our Congressman or Senator by many different methods of communication: telephone, email, and even Facebook in some instances. If you don’t contact them and communicate through their office staff, then the person representing you in Congress can’t know what you believe or desire from their service!
We the people DO have a voice to Congress. It’s the power of our vote.
Please remember this in November.