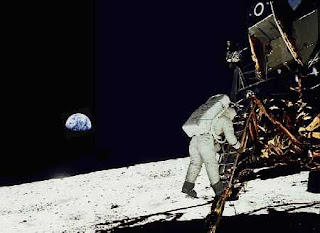 "Houston, Tranquility Base here. The Eagle has landed."

The Apollo 11 lunar landing on this day 41 years ago culminated the greatest technological achievement of human history. America demonstrated to the world what men can accomplish with a goal, a deadline, inspiration, and motivation. When President Kennedy announced the dramatic and ambitious goal of sending an American safely to the Moon before the end of the decade, the fledgling NASA had completed only one manned space flight lasting 15 minutes 28 seconds and reaching the altitude of 116 statute miles above the Earth. (For comparison, the ISS maintains an average altitude of 240 statute miles and Scaled Composite’s SpaceShipOne won the Ansari X-Prize by reaching 62 miles.)

Today the US Space program is without a goal, floundering and sending mixed messages to the public. Sustained by half of 1% of the federal budget, the agency works without adequate financial support to achive missions developed by former administrations and Congresses. (For comparison, if the federal budget represents a household with an annual income of $100,000; NASA costs about $500 per year. That's $41.60 a month, or less than you probably spend on your cable bill.)

Much attention has been given on President Obama cutting the most visible component of NASA, the Manned Space exploration program Constellation, leaving the United States earthbound and completely dependent upon the Russians to reach lower Earth orbit, including the International Space Station.

Commercial vehicles do show promise, but have not yet achieved manned orbital flight, whereas NASA has 48 years of experience. John Glenn met with President Obama yesterday to discuss the administration’s plan for NASA, but White House officials did not reveal specifics of the meeting. Glenn is on record supporting additional Shuttle flights while NASA develops a new heavy-lift rocket.

The President’s plan for NASA divides the Apollo moonwalkers. Neil Armstrong, the first man on the moon, and Gene Cernan, the last man on the moon, oppose Obama’s plan publicly, testifying in May before the Senate Commerce, Science and Transportation Committee.

"Nowhere do we find a commitment in dollars to support this national endeavor," Cernan said, adding later that "this budget proposal presents no challenges, has no focus, and in fact is a blueprint for a mission to nowhere."

Armstrong’s concern focused on the Obama administration’s decision being, “a plan that was invisible to so many was likely contrived by a very small group in secret.”
“New non-classified national program concepts are, typically, accompanied by substantial review and debate in a number of venues.” Armstrong testified that he was unable to find a person, “in NASA, the Defense Department, the Air Force, the National Academies, industry, or academia that had any knowledge of the plan prior to its announcement.”

Yesterday Buzz Aldrin released his own statement. Largely in support of President Obama’s plans to fund commercial development, he shares his Apollo colleagues concern “…about ‘the Gap’ — the end of the Space Shuttle Program, and the inability for the US to provide human access to space — save for limited flight opportunities and capabilities with our Russian partners…” However, Aldrin proposes various solutions for the President, and concludes by inviting the nation to get behind the new direction for NASA.

If only we knew what that new direction will be. On the anniversary of our greatest achievement, we face a very uncertain future.