Sometimes there are no answers

By Shelly Kelly May 18, 2010
Saturday morning the phone rang at 5:30 a.m. Phones that ring so early in the morning never bring good news. Half-asleep, my first thoughts went to my two elderly grandmothers – each suffering their own challenges.
But as my husband handed me the phone he said, “It’s Rebecca,” and my heart stopped.
Her 17 year old son was dead.
I lay in bed, barely breathing, as she told me what she had to, saying words none of us are ever prepared to say or hear when talking about our children. An hour later, I hung up the wet telephone receiver, turned to my husband, and completely lost it.
I spent that first day in a stunned stupor, making additional necessary phone calls telling people the basic information I knew, answering most other questions with “I don’t know.” By Saturday evening, another friend who lived closer, headed into Ohio to help. I felt so conflicted – torn – between leaving immediately and staying at home with my daughters and their activities.
I chose to wait; to fly up for the funeral and an extra day. But those three days of waiting were so painful--feeling isolated and unable to offer my help, wavering between an intense anger and overwhelming despairing sadness. I knew Rebecca had plenty of help from her family and our friend, D., but I needed so badly to be there with her.
Wednesday, during the flight to Ohio, I grew fearful of the intense emotions I anticipated. Instead, my emotions turned themselves off, superseded by a firm, logical, “Be there, Be strong” attitude. While I imagined that I would see D. at the airport and burst into tears, instead I became the rock as he crumpled into my arms, allowing himself a moment of surrender to the exhaustion and impossible sadness. 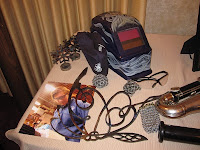 At the service and visitation that evening, the young man Nick had become emerged through friends and family stories. Some details I knew – Eagle Scout, accomplished musician of five instruments, long hair, Runescape gamer. Some I didn’t. Nick loved making chain-mail, twisting wire around dowels and cutting them out to fashion complicated designs. At the beginning of his junior year he applied for and was accepted into a special high school technical program for welding – resulting in the creation of stunning intricate metal artwork. Stories revealed his adventurous side, so much like his mother, and his softer generous side, a peacemaker whom his friends jokingly called “Jesus” in part because of his long hair and in part because of his ability to resolve conflict between friends.

The rest of my visit encompassed the stillness that follows when activity slows and the days seem long.
Be still.
Be still.
And largely – we were. That day almost felt as though there is no “time”. No clock. No appointments. We sat around the kitchen table. We sat on the back porch, the warmth of the sun permeating our cold bodies. Sometimes talking, sometimes silent. Rebecca sleeps. She rests, safe, surrounded by love.
I know she’ll get through this. I know she’ll be “okay” – which is never going to be the right word to describe going forward. I know she’ll survive this terrible event, but I pray for God to sustain her through those dark quiet moments when the sadness and emptiness threaten to overwhelm her. She knows they lurk on the path ahead, that she will be battered, yet it is a journey she has to follow. I pray for God to be her inner strength and let His faith be a guide and light during that darkness.
"Blessed are those who mourn, for they will be comforted." - Matthew 5:4