Am I the only person who has wondered why some dates seem to be magnets for unpleasant events? About three years ago, my husband commented that there seem to be an awful lot of events or anniversaries taking place in the days before our wedding anniversary. Off the top of my head...

President Abraham Lincoln was shot in Ford’s Theater on April 14, 1865 and died the next morning. The unsinkable ship, Titanic, struck an iceberg and sank in the evening/morning hours of April 14/15, 1912. Three years ago on April 16, thirty-three people were killed in a shooting at Virginia Tech. Saturday, April 17 marked the 63rd anniversary of the Texas City Disaster - the worst industrial disaster in U.S. history. Yesterday, residents in San Francisco gathered at Lotta’s Fountain to commemorate the 1906 Earthquake. 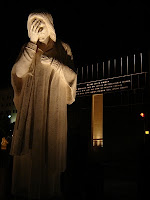 Today we observe the 15th anniversary of the Oklahoma City bombing. My husband, raised in Oklahoma City, counts among his friends those who were first responders. They were willing to share some of their personal experience of that day’s particular horrors with us, and we were privileged to accompany them the first time they visited the Memorial Museum.

After hearing their first-hand accounts, what I choose to remember most about that terrible day is not 9:02 a.m., but the hours that followed: an unprecedented community response. The outpouring donations of food and volunteers in support of the police, firefighters, nurses and doctors who worked round the clock in the aftermath was an example to the world of unity, compassion, and love stronger than any evil.

My husband and I were in Oklahoma visiting the Murrah Federal Building site when we received word of the Columbine school shooting on April 20, 1999.

To deal this unique week of events, I often turn a quote from Pope John Paul II’s final letter to the world:

"To humanity which at times seems to be lost and dominated by the power of evil, selfishness, and fear, the risen Lord offers the gift of his love that pardons, reconciles and opens the soul to hope. It is LOVE that converts hearts and brings peace. How much the world needs to understand and accept Divine Mercy."