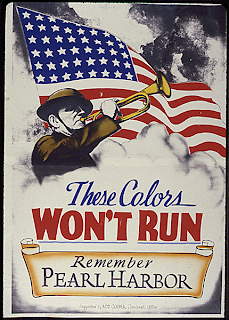 The instant I awoke this morning I realized it was Pearl Harbor Day. I don’t know exactly what Pearl Harbor means to most people anymore. How aware are they of the significance of that day? That thought led me to wonder whether in 68 years there will be young adults, teenagers, and children for whom Ground Zero is just a memorial in New York City representing some event one day in the distant past.


I visited Pearl Harbor in 1988; rode the ferry over to the U.S.S. Arizona Memorial and stood in awe of the immensity of the attack. Tourists from all over the world joined me in hushed silence as we looked across Battleship Row and paid respect to those thousands who died in the attack.

On that fateful Sunday morning in 1941, there were ninety-four American warships anchored off the coast of Oahu in the US Territory of the Hawaiian Islands. At 6:30 a.m. American patrol planes sighted the first of two midget submarines trying to sneak into the harbor. A little after 7 a.m., a soldier at a U.S. Army radar station picked up an image representing a large number of planes, but officers assumed they were a flight of American bombers expected from California. The Japanese attack began at 7:55 a.m., unleashing bombs and torpedoes on Battleship Row, Ford Island Naval Air Station, Hickam Field, among other targets across the island. After two waves of attacks, with heated return fire from the US forces, the Japanese were able to successfully destroy five U.S. battleships, a number of other ships, and 261 aircraft, killing 2,390 Americans and wounding 1,178 others. 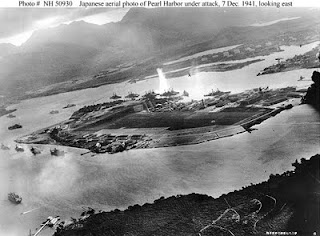 The secret attack at Pearl Harbor was the worst WWII defeat of the United States, and it united our country and forced us decisively into WWII.

I encourage everyone not familiar with the events of the day to take some time and read more about it. The National Archives website offers a few documents, including the original typescript of President Roosevelt’s Day of Infamy speech before Congress the following day. There are excellent photographs at the Naval History & Heritage Command website.

Though many years have passed, as I read about Japan and the U.S. at the precipice of war in the late 1930s, I cannot help but wonder whether the politics of the world have changed all that much. The game is still afoot, though the major players have different names. No one desires war, but many desire to knock down our powerful country and all it stands for. On 9-11 I went home, full of hurt and anger and put out our U.S. flag. I remember thinking that this day was our Pearl Harbor and wondering how much our daily lives would be affected. I continue to wonder what lays ahead for us, and whether we would really be able and willing to "Work, Fight, Sacrifice" for our country in the manner of our grandparents generation.