Running the Marathon of Life 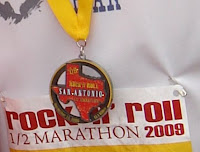 Once again, Lisa and I spent the weekend in San Antonio. Our husbands, sister-in-law, and two of their siblings ran Sunday in the Rock and Roll Half Marathon. We brought our five children up on Saturday night to cheer them on.
As over 30,000 runners took to the streets of San Antonio early Sunday morning, we staked out our first viewing area at mile 2, Alamo Plaza. The wheelchair marathoners started first, arms bulging as they spun their chairs, legs absent or tucked tightly into place. The Kenyans and other favored front-runners led a long steady seemingly never-ending stream of runners of all ages that passed by for over an hour.

Running is a solitary sport; the average marathoner races not against others, but against himself, striving to find his limit and go farther. This internal struggle about pushing yourself, telling your body it can keep going--my husband says that’s where you find faith.
At the Runners Expo the day before the marathon, he found himself drawn to a booth for a ministry called Team 413. Their name comes from Philippians 4:13 I can do all things through Christ who strengthens me. When you are focused on running, you draw on your faith that God is going to support you towards that finish line. Even when your body says you can’t, He says you can.

Even though running is a solitary event, I’ve heard from our five family runners how much they prefer to run with others. How they fall into packs of other runners with a similar pace and run together, not necessarily as part of a team, but still drawing encouragement from one another. Just as we go through life as individuals, we surround ourselves with people that encourage us and push us to succeed in a variety of ways.
This is the second half-marathon for my husband and he noted that the Rock'n' Roll marathon series attracted a noticeably larger number of spectators lining the entire route. In addition to the various music stages set every few miles, there were local cheerleader, dance teams, and a high school band out motivating the runners.
At one point, runners passed by a gathering of severely disabled young people, ages four to fifteen, who had been brought out to witness the runners even though the children were largely unable to cheer and may not have been entirely cognizant of what they were seeing. They lined the sidewalk taking it all in with their teachers in attendance. My husband noticed them because of their headgear and special needs wheelchairs. He grew up with a cousin who has a severe form of cerebral palsy, so as he passed by the students he waved to them, made eye contact and called our Hi, Good Morning, Thank you for being here. Some of the students recognized that he had made eye contact, was talking to them, and their faces brightened. As he continued running, other runners were also acknowledging the children. 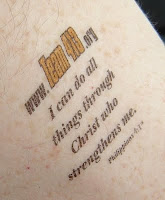