By Shelly Kelly October 22, 2009
Lisa wanted to post a book review this morning, but I have insisted all week that I was going to write something about today and what it means to me. And now that the day is here, I'm still struggling to write it.
I expect all of us have a special day where we remember someone we've lost. October 22 is that day for me. When I was five years old, my cousin died. It's been 33 years and I can't say exactly why this day still stands out to me. I suppose something about losing him embedded itself deep within me.
We were living in St. Louis. He had an accident, was in hospital, and died about a week later. Mom told me many years ago where we were on that day and how we drove back to Houston while he was in the hospital, but did not attend the funeral. The funny thing is I can remember what we were doing the day of the accident, but I do not remember the drive back to Houston or being in Houston. I do remember Halloween a week later.
I remember my cousin, though the memories are fuzzy around the edges after so many years. He was 7, nearly 8 years old. I'm told he was a handful, but what I remember most is playing in the backyard in his tree fort, and building castles with legos, and playing with his puppy. One time he had friends over when we were visiting and he didn't want to play with me and I remember being very angry and hurt about that.
A few years ago I conducted an oral history with my grandmother and she talked about that horrible day and his death. I've spoken with my aunt a few times about it also, but I'll never really comprehend how she found the strength to get through that experience.
When I was pregnant with my first child, I asked my aunt if I could name the baby in honor of my cousin. My aunt not only agreed, but also she gave me my cousin's baby shoes for my daughter's baptism. In the weeks before my daughter's eighth birthday, I had a moment of irrational fear that something might happen to her, but once she passed that milestone I've rarely thought of it again. I've never spoken of it until now. I know it sounds completely ridiculous.

As a child, when I learned about heaven and seeing our loved ones there, I often wondered whether I'd meet him as a child or as an adult.

Still, every year on October 22, I stop and remember him. I think about how old he would be this year and wonder who he would be had he lived. 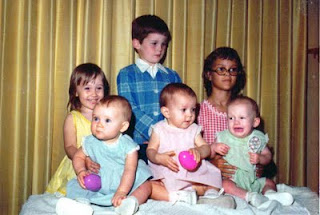 The photo I wanted to use isn't available to me at the moment, so I'll post this one of all the cousins at Easter, 1974. I am in the back row in yellow with Lisa in front of me. Cameron is in the blue suit.