40 Days for Life Update from Houston

By Lisa Henley Jones October 05, 2009
At the beginning of this "Respect Life Month", I received an update from 40 Days for Life with the following message....

I received a report from Houston that was both eye-opening and heartbreaking.  People participating in the 40 Days for Life vigil watched as a young man who appeared to be in tears walked into Planned Parenthood with his girlfriend and her mother.  When they left some time later, he was most certainly crying -- and obviously quite upset.

I'll let one of the prayer vigil participants pick up the story...

I watched him head down the street, alternating  between wiping the tears from his face and punching  the buildings in anger and frustration as he passed  them. Eventually he headed back toward the parking  lot. As he approached, I went to him first. All I  could think to say was that I was so very sorry for  his loss. He began to cry again.

Then a truck pulled up leaving the parking lot with  his girlfriend and her mother inside. The girl's  mother yelled at him to get in and cursed him as he  opened the door. He had one foot inside, then  stepped back out and closed the door. As she drove  away he promptly sat down on the curb and cried  like a baby. Three of us sat down beside him -- all  men -- and cried with him.

Eventually, he began to talk. He was probably in  his very early twenties. He told us that his  girlfriend did not want to keep the child because  she feared they would not be able to provide for  him. He asked her how she could destroy a life  based on a hunch. He told her this child had a  heartbeat and a soul and deserved to live. He even  tried to convince her to, at the very least, put  the child up for adoption.

I was struck by the fact that this young man knew  all this simply because his heart told him it was  true. He was wise well beyond his years and he was  hurting terribly.

I was struck by the clear reality that fathers have  so little to do with whether their own children  live or die. I also couldn't help but notice that  despite the high volume of Planned Parenthood  volunteers around, none of them approached him. 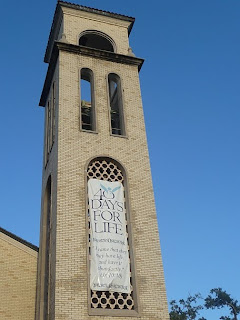 Before I left him, he stood up to hug me. All I  could tell him was what I truly believed -- that  today, his child knows that his/her father fought  for it. That to his child, he is a hero and that  someday he would know that also.

Please pray for this young man and others like him.The tragedy of abortion is real and happening every day. No one knows that better than he.

I sincerely hope this young man comes to embrace the exceptional advice he was given; but that will most certainly take time. I cannot even begin to imagine the anguish.

This is a first-person account of what abortion does to fathers. Who knows how many others have walked in his shoes, as there are more than a million abortions every year -- and more than 50 million since the 1973 Roe v. Wade decision that opened the floodgates to abortion on demand.

Visit the 40 Days for Life Blog for more personal testimony, prayer vigil locations, or to receive their daily devotionals during the campaign.  It is beautful to see people speaking up for those who cannot speak for themselves and living out the Gospel in this way.