By Shelly Kelly September 11, 2009
This is My commandment, that you love one another, just as I have loved you. Greater love has no one than this, that one lay down his life for his friends. John 15:12-13

As we pause this morning to remember where we were eight years ago when our country was attacked, let us remember Port Authority Officer Joseph M. Navas, who truly lived Jesus’ commandment.

Joseph Michael Navas, born on February 11, 1957 to Rosemarie and Joseph Navas, grew up in Paramus, New Jersey with his two sisters, Denise and Lisa. His school friends remember him as a playful practical joker who made assignments fun. Debbie Bogosian, an elementary school classmate remembers him as “the kind of kid that everyone took a liking too... that kind of easy going person.”

In 1994 Navas joined the Port Authority’s Emergency Services Unit at Journal Square where he trained for specialized high-risk rescues in rescue diving, confined space repelling, and chemical and biological counter-terrorism.

For fifteen years, he was a devoted husband to his wife, Karen. Together they had three children: Jessica, Joey and Justin. Navas spent his off-duty time playing or coaching little league ball or ice hockey, riding bikes with his sons, and watching his daughter, perform with her cheerleader squad. He loved recreational diving, skiing, and gardening. His wife remembers that “He wanted his family to be safe. He wanted everybody to be safe.”

On the morning of Sept 11, 2001, Officer Navas, was summoned to the World Trade Center towers. He was last seen leading other emergency service officers into the North Tower. Curt Kellinger, from the Port Authority Police Command noted "The last we heard he was on the 66th floor. That was the last transmission. The 66th floor."

When the World Trade Center towers fell, Navas and thirty-six Port Authority officers were among those killed. His body was never recovered. His family and friends celebrated his life with a Memorial Mass at the Roman Catholic Church of the Annunciation in Paramus, NJ.

As we remember Joseph Michael Navas and the many others who lost their lives in the 9-11 attack on the United States, let us call to mind the words prayed by Pope Benedict XVI during his visit to Ground Zero last year.


God of peace, bring your peace to our violent world:

peace in the hearts of all men and women

and peace among the nations of the earth.

Turn to your way of love
those whose hearts and minds

are consumed with hatred. 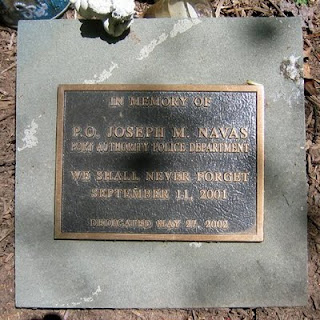