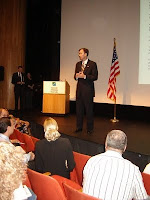 Saturday morning I attended my first Town Hall meeting with Texas District 22 Representative Pete Olson. I’ve never been overly impressed by Rep. Olson for a number of reasons, partly because I believe he pays more attention to the Fort Bend GOP area of his district and partly because as a freshman representative, he really doesn’t have any influence beyond casting his vote.

However, he is my Representative and even though Lisa & Mom attended his Ft. Bend Town Hall meeting a few weeks ago, I wanted to hear what he had to say about NASA spending on this side of the District.

By my best guess there were about 250 attending (the theater wasn’t at capacity) and while a majority were 55 and older, there were a number of younger families, some with their children.

After a little background about growing up in Taylor Lake Village, attending Rice University, UT Law, ten years as a Naval Aviator, and working for Texas Senator’s Phil Gramm and John Cornyn, Olson reminded the audience that we are all Texans. That we need to show respect for each other, that we all have the same rights to free speech and to petition our government.

He offered support to new NASA Administrator Charlie Bolden, calling him the right man in the right place at the right time. For those in the audience unfamiliar with the Augustine Report (not many), Olson told us the report states that NASA funding for the last decade is at a level insufficient to meet their goals. A few comments came from the audience that funding has been insufficient for the last three decades.

Olson pointed out that no other federal agency has the power to inspire people the way that NASA does and you can’t put a price tag on that. The United States has been a leader in space for the past fifty years and we must not yield that position to China or Russia.

Moving to the Stimulus bill, he told us that Representatives were given the full text of the bill only fifteen hours before the vote. This is absolutely an insufficient amount of time to conduct a review or in depth analysis of a thousand-plus pages of the largest spending bill in U.S. history.

Olson received loud applause when he stated that he voted against the “Cap and Tax” bill, noting that it’s bad for America and especially bad for our area. The crowd audibly gasped when his slide came up showing that

“The Texas State Comptroller’s Office analysis has indicated that Texas could lose 135,000 to 277,000 jobs in 2012, the first year of the proposed cap-and-trade regulation. The average Texas household could pay up to an extra $1,136 on household goods and services over a year with a total potential cost to Texas families of $6.9 billion.”

He mentioned a study that says even if the US stopped all CO2 emissions, the emissions coming out of China and India would make up the difference in a number of years. (He didn’t cite the specific study.) A member of the audience shouted out “Nuclear Power” to which Olson said he would like to see 100 nuclear power plants in place by 2030. When another person in the crowd called out “What about the waste?” Olson said all waste would have to be stored on-site, because a bill from the Carter administration banned reprocessing nuclear waste.

One of his statements that stood out was that we need to develop all available forms of alternative power, but we can not allow the federal government to dictate what power is brought to the market.

Olson received a little more shouting when he ventured into the Health Care debate. He said that despite the President’s speech last week, the House of Representatives has not seen any bill on Health Care reform from the White House. The only bill they’re dealing with at the present is HR 3200. Olson spelled out the Republican party ideas for health care reform, all of which have been stifled:

When he said Texas Style Tort Reform, there was huge applause followed by two specific hecklers who began shouting at him calling him a liar. The crowd looked surprised at first and then loudly responded to the hecklers with calls to shush, be respectful, let him finish, etc. As the hecklers continued, the crowd grew frustrated.

Then Rep. Olson advanced the PowerPoint slide to a photo of a young boy. Immediately the two hecklers and a man with a video camera on the left side of the theater began shouting something. It became evident they were purposefully trying to goad the Congressman. There were no questions or answers, it was just shouting. The crowd erupted. The hecklers were shouting lies about this young boy and the majority of the audience responded by yelling back to be respectful, be quiet, let the man finish, etc.

After the meeting I learned that the dissenters were there specifically to disrupt the meeting for their own purposes. It doesn’t take much to find the instigator, but I will not link to his website. If you’re reading our blog, it’s not likely that you’re following the shameful pranks of a handful of people intent on fabricating a ‘story’ for the media.

The crowd yelling attracted the attention of the two University police officers outside the theater. They came to the side of the theater and with the audience now chanting “Get her out!” they asked a woman (one of the original two hecklers) and her husband to step outside. Officer Pirtle assertively addressed the crowd, informing us that we needed to be civil and if we couldn’t he had no problem asking us to leave. He asked us to have respect for our elected Representative and respect for each other. The audience applauded him loudly and many called out “Thank you.” The officers did ask another man to step out of the theater, and all three persons removed were allowed back in a few moments later.

The second half of the Town Hall consisted of Olson reading and answering about twenty written questions submitted by the audience just before the beginning. While there were a few more audible comments and questions from the crowd, nothing got out of hand.

On the whole I was disappointed at the behavior of the handful of dissenters who probably got what they came for considering I’ve now seen their website. I have a little more respect for Rep. Olson, because I felt he did a fair job handling the audience. He did not engage those shouting; he stepped back and let them shout, and then got back to the business of giving his talk. He listened to the questions called out, but for the most part did not answer them, sticking to the written questions. He displayed respect and courtesy for his constituents.
The last question addressed said “What can the average citizen do to effect change in Washington?” Olson answered, “Get involved and stay involved. ... The Town Hall meetings, even what’s happening in them, are good for the country because they promote a free and open exchange. ... This is American democracy in action.” 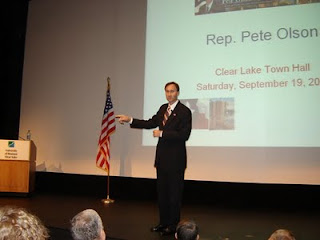