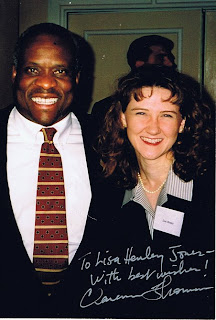 With the recent hearings for Supreme Court nominee, Judge Sotomayor, I am reminded of another set of confirmation hearings in 1991, that was not nearly as civil. If your knowledge of Justice Clarence Thomas is limited to the public lynching that occurred during his confirmation hearing 18 years ago, you are missing out on the story of a truly amazing life journey.

There is something special, not only about his own life story, but about his love of young people. Justice Thomas is somewhat known for his encouragement and support of the goals, dreams and achievements in the young. Probably attributable to his own struggles and the support he received from his grandfather while growing up.


This May, while our President was talking down the accomplishments, goals and dreams of graduates at commencement ceremonies, Justice Thomas was delivering a very different type of message; to a local high school graduating class in Maryland. One headline titled the speech, "Always do right, Even when it's hard." I encourage you to take a moment and read the article highlighting excerpts from his speech. It is the type of speech I wish I'd heard at my own graduations. Inspiring, honest and humble.


The story of how he came to be invited to that high school to speak is equally impressive. He met two students, football players being recruited by Nebraska, while sitting in coach on a plane ride. After hours of speaking on the plane, the students went back to school and asked their principal to invite Justice Thomas to speak at their graduation. To everyone's surprise, he did just that. 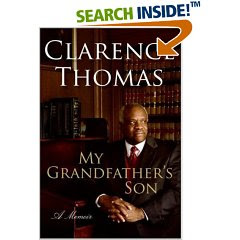 For an even clearer picture of how and why Justice Thomas thinks the way he does, you must read “My Grandfather’s Son”, his autobiography. It is a very heartfelt and personal book that helps you understand the forces in his life that shaped him and why he is such a powerful figure on the Supreme Court. Justice Thomas recounts how his faith, courage, and perseverance inspired him to rise up against all odds and achieve his dreams.

I speak and write about Justice Thomas with an undeniable bias. To me, he is an incredible thinker, jurist, speaker and personable human being. Meeting him, while I was still a law student, shaped my thinking in a way I wouldn't have thought possible before. My autographed picture of him and I is still sitting framed on my desk after more than a decade. And I have no plans to ever move it.