By Shelly Kelly August 26, 2009
This morning I woke to the news that Sen. Edward M. Kennedy has died.

Many years ago, I served as a White House intern and I well remember the talk about Sen. Kennedy and how to deal with him. In fact, at one signing ceremony I was nearly run down by him on the South Lawn of the White House; he towered over me and would have knocked me over without noticing if someone hadn't pulled me out of the aisle at the last minute. (Thanks Helen.)

But this morning I have been considering his life and the crushing expectations placed on him.


The youngest of nine children, with extremely powerful politically-connected parents, his formation years as a child were privileged. At the time of his birth, his father, Joe Kennedy had already made a fortune and more, and was backing President Roosevelt both financially and politically. When Teddy was six years old, they moved to England, where the family was feted while his father served as U.S. Ambassador. He could not have kept from developing a feeling of carefree royalty in a bustling family of older brothers and sisters. 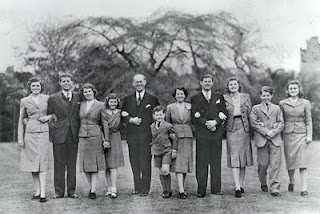 Joe & Rose Kennedy's overwhelming ambition for their sons is no secret. Can any of us even begin to conceive the weight that must have descended on Teddy as the family suffered one tragedy after another. When he was just nine years old, his oldest sister received a lobotomy and was institutionalized; at 12, he lost his oldest brother in World War II. When he was 16, his second oldest sister died in a plane crash.

As a young man, did he ever have any real control over his own destiny or was it largely pre-determined by his family connections? Was there ever a moment when he wanted to break out on his own, go his own way, make his own mark? Expelled from Harvard, he enlisted in the U.S. Army in 1951, but did not receive the intelligence assignment he requested. Within two years he was discharged and back at Harvard, where he played football and earned a B.A. in history and government. He was graduated from the University of Virginia School of Law in 1959.

Teddy's adult life seems to have been directed by his domineering father and charismatic older brothers. When Jack ran for President, Teddy did his part on the campaign trail. With Bobby named Attorney General, there must be an "assignment" for Teddy, but at 28, he wasn't old enough to step up and fill Jack's Senate seat. (Senators must be thirty.) It was arranged to have the seat held by a friend until Teddy was old enough to be elected. He served as Senator from November 7, 1962 until his death. 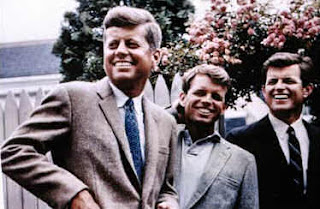 A year later, President Kennedy was assassinated, and the family destiny and public adoration fell onto Bobby. Then in a cruel twist, Robert F. Kennedy was assassinated. The burden landed squarely on Teddy's shoulders and his life spiraled out of control. His own presidency was not meant to be; on July 18, 1969 his actions (and inactions) led to the death of Mary Jo Kopechne.
Ted Kennedy will be eulogized this week for his role as U.S. Senator, the "Liberal Lion" who served with passion, gusto, and stalwart effectiveness. While many view his accomplishments with great respect, the biography of his playboy years, his indiscretions, his personal problems, his family dynamics, reveals that he also may have had a troubled soul.
This week, some will try to sanctify Ted Kennedy, while others will disparage him, and many will attempt to use his death for their own political gain. Regardless of your political viewpoints, please join me in a prayer for forgiveness of any transgressions and rest for the soul of a man that worked hard for our country.