Community Organizers vs The Mob

By Shelly Kelly August 06, 2009
Unless you've been living under a rock, avoiding Facebook and Twitter, you're probably aware that citizens, both Republican and Democrat, are attending town hall meetings hosted by their US Representative and questioning the government healthcare plan.

In return for their dedication and duty, ordinary citizens who have the audacity to question this 1200+ page bill and request answers, are being labeled "angry mobs". Even worse, these citizens, some of whom have never protested a thing in their life, are being disparaged directly by the DNC.

Those of us who stand up and question a bill being considered by OUR government are being called desperate, angry, intimidating, well-organized, extreme, and thuggish. Oh, and we're also too well-dressed (many of us coming straight from our jobs...) and therefore we have well-funded allies who are scaring us with lies and funding our efforts.

Apparently you can't be "grass-roots" if you don't support the "progressive reform" movement. You can't have an independent thought, talk with your neighbor and find out they share a similar thought, ask one another "What can we do", and decide jointly to find more neighbors and meet at the local Chick-fil-A to talk while the kids play on the playset. Then as a small group, you meet other small groups and attend a town hall to ask your Representative why this bill is being pushed through so quickly and express your concerns.

This is "MOB" behavior. 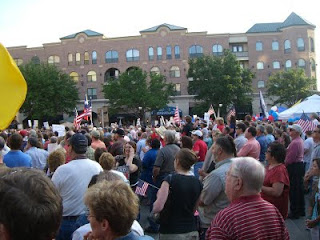 Let's see what the President of the United States says:

This is the moment our movement was built for.

For one month, the fight for health insurance reform leaves the backrooms of Washington, D.C., and returns to communities across America. Throughout August, members of Congress are back home, where the hands they shake and the voices they hear will not belong to lobbyists, but to people like you.
Home is where we're strongest. We didn't win last year's election together at a committee hearing in D.C. We won it on the doorsteps and the phone lines, at the softball games and the town meetings, and in every part of this great country where people gather to talk about what matters most. And if you're willing to step up once again, that's exactly where we're going to win this historic campaign for the guaranteed, affordable health insurance that every American deserves.

There are those who profit from the status quo, or see this debate as a political game, and they will stop at nothing to block reform. They are filling the airwaves and the internet with outrageous falsehoods to scare people into opposing change. And some people, not surprisingly, are getting pretty nervous.
So we've got to get out there, fight lies with truth, and set the record straight.

That's why Organizing for America is putting together thousands of events this month where you can reach out to neighbors, show your support, and make certain your members of Congress know that you're counting on them to act.

But these canvasses, town halls, and gatherings only make a difference if you turn up to knock on doors, share your views, and show your support. So here's what I need from you: Can you commit to join at least one event in your community this month?
In politics, there's a rule that says when you ask people to get involved, always tell them it'll be easy. Well, let's be honest here: Passing comprehensive health insurance reform will not be easy. Every President since Harry Truman has talked about it, and the most powerful and experienced lobbyists in Washington stand in the way.

But every day we don't act, Americans watch their premiums rise three times faster than wages, small businesses and families are pushed towards bankruptcy, and 14,000 people lose their coverage entirely. The cost of inaction is simply too much for the people of this nation to bear.
So yes, fixing this crisis will not be easy. Our opponents will attack us every day for daring to try. It will require time, and hard work, and there will be days when we don't know if we have anything more to give. But there comes a moment when we all have to choose between doing what's easy, and doing what's right.

This is one of those times. And moments like this are what this movement was built for. So, are you ready?
Please commit now to taking at least one action in your community this month to build support for health insurance reform.
Let's seize this moment and win this historic victory for our economy, our health and our families.
Thank you,
President Barack Obama

I guess when you fight "the Mob" they call you a "community organizer."