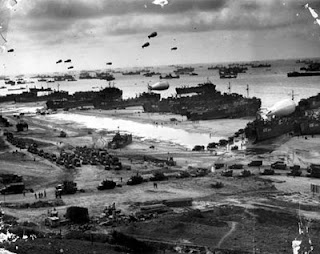 On the eve of the 65th anniversary of D-Day, I sat watching the first twenty minutes of Saving Private Ryan. Like many, I saw this for the first time in the theater, stunned, and sobbing. Watching the men try to emerge from the Higgins boats on the beach....the door drops open and men are picked off by machine guns until some begin to go over the side of the boats into the water. I had never considered how the bullets pierced the water to strike their victims.

I sob at the immense loss of life. How could the great generals make the decision to invade, knowing what the costs would be, without hardening themselves into cold steel, turning off every emotion.

And equally amazing that the US did not say, “That’s enough. We’ll lose too many men. It’s too risky.” They knew what freedoms were at risk under Hitler. The occupation of Europe had to end. I wonder, without our soldiers bravery and sacrifice on D-Day, would we have been able to stop the unspeakable savagery of the Holocaust.

Indeed, this prayer could be said today for our service men and women across the world, but especially in the Middle East.

My fellow Americans: Last night, when I spoke with you about the fall of Rome, I knew at that moment that troops of the United States and our allies were crossing the Channel in another and greater operation. It has come to pass with success thus far.

And so, in this poignant hour, I ask you to join with me in prayer:

Almighty God: Our sons, pride of our Nation, this day have set upon a mighty endeavor, a struggle to preserve our Republic, our religion, and our civilization, and to set free a suffering humanity.

Lead them straight and true; give strength to their arms, stoutness to their hearts, steadfastness in their faith.

They will need Thy blessings. Their road will be long and hard. For the enemy is strong. He may hurl back our forces. Success may not come with rushing speed, but we shall return again and again; and we know that by Thy grace, and by the righteousness of our cause, our sons
will triumph.

They will be sore tried, by night and by day, without rest-until the victory is won. The darkness will be rent by noise and flame. Men's souls will be shaken with the violences of war.

Some will never return. Embrace these, Father, and receive them, Thy heroic servants, into Thy kingdom.

And for us at home -- fathers, mothers, children, wives, sisters, and brothers of brave men overseas -- whose thoughts and prayers are ever with them--help us, Almighty God, to rededicate ourselves in renewed faith in Thee in this hour of great sacrifice.

Many people have urged that I call the Nation into a single day of special prayer. But because the road is long and the desire is great, I ask that our people devote themselves in a continuance of prayer. As we rise to each new day, and again when each day is spent, let words of prayer be on our lips, invoking Thy help to our efforts.

Give us strength, too -- strength in our daily tasks, to redouble the contributions we make in the physical and the material support of our armed forces.

And let our hearts be stout, to wait out the long travail, to bear sorrows that may come, to impart our courage unto our sons wheresoever they
may be.

With Thy blessing, we shall prevail over the unholy forces of our enemy. Help us to conquer the apostles of greed and racial arrogancies. Lead us to the saving of our country, and with our sister Nations into a world unity that will spell a sure peace a peace invulnerable to the schemings of unworthy men. And a peace that will let all of men live in freedom, reaping the just rewards of their honest toil.

Thy will be done, Almighty God.
Amen.

And for those of you who would like to hear FDR's voice saying the prayer, I direct you here.